Just a month and a few days ago, Englishman Liam Robinson did not know that he would play at Kunětická Hora this year. But then, in a dramatic qualification, he earned one of the invites and on Thursday, he hit a great Hole in one, for which he received Omega luxury watch.

Last year was very unlucky for Robinson. He had the opportunity to participate in two Challenge Tour events, but he had to withdraw due the injury. That put him out of the game for six months, and the qualification for czech events was actually a return to golf for Robinson.

“The first round in Kunětická Hora was my only third round since returning,” admits a sympatic Englishman who earned his start at Kunětická Hora in a dramatic playoff with Austrian Manuel Trappel. He eventually succeeded day later as well, so he will play the Prague Golf Challenge this year in Zbraslav. But he will arrive with new Omega Seamaster Aqua Terra Golf watches worth over €5,000. These were donated by jewellery Dušák and will not return to the store. For the ace at 8th hole Liam Robinson will bring them home.

“It’s my fourth career ace, but the first in the tournament. And of course the first with such a price. I was a bit slower at the start of the round, but the ace kicked me then,” admits the Englishman who played great and scored 67 (-5) and was T-3 after the first round. „On the next tee I couldnt calm down and it resulted in bogey. But I managed to get my game back together and finished in a solid way.“

And how  he saw his life shot? “It was a perfect distance for me, it was similar to the practice round. I took the right club to my hand and I believed it. It was a light draw to the hole, “he describes his shot that secured him a new watch.

“We did not know that the ball ended up in the hole but it was there,” he adds with a smile and shows us his new toy, still in a beautiful wooden box. It will not remain in that: “I’m wearing watches, but I have not had such luxurious Omega yet. I’m excited about it. ”

If he continues his good game, maybe he will take another trophy from Kunětická Hora on Sunday: “I would have been ecstatic if I was successful. I’m really looking forward to the next three rounds.” 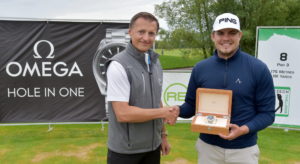